Where Is Pickleball Most Popular: The 12 Top-Ranking Cities In The U.S 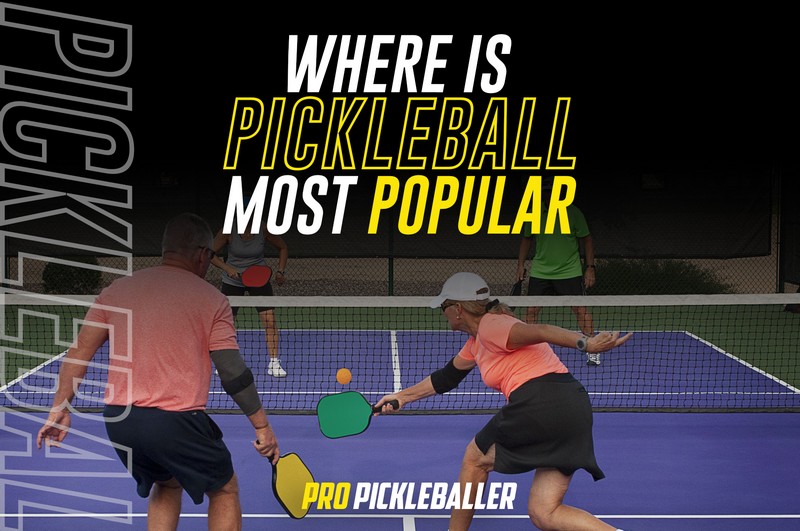 You can’t mention the fastest-growing sports in America and not including pickleball. Doing so would be a blunder to the fans and players.

We are talking about a game whose accessories are pocket-friendly. Pickleball doesn’t even have a dress code like other sports. But that doesn’t mean you don’t have to dress well or appear sporty.

From children to senior citizens, pickleball is never short of players. But when looking for where to play, where can you count on to match your cravings for the game? Let’s rephrase the question. Where is pickleball most popular?

So, this article would be about cities across the United States of America where pickleball is popular and growing fast. Read on!

Where Is Pickleball Most Popular?

Pickleball originated from Bainbridge Island, a small city located in Western Washington. Unfortunately, this is not where pickleball is most popular.

Seattle, WA, has the highest number of pickleball courts. Therefore, it’s where the game is most popular, at the time of writing. It boasts 3 courts per 20,000 residents.

However, Naples, a city in Florida, has surprisingly entered the map of pickleball’s most popular places. Many call Naples the world’s pickleball capital, which seems like a fitting title. And it’s all thanks to the US Open Pickleball Championships organized in 2021.

The United States remains the most popular place for pickleball. It boasts over 15,000 pickleball courts and 5,000 venues.

12 Places Where Pickleball Is Most Popular In The United States

Pickleball has spread to different parts of the United States but in varied capacities and growth rates. The number of pickleball courts keeps increasing in most states with great speed.

So, it won’t be a big surprise if a new state not on this list becomes the most popular place for pickleball a few years from now. The game is growing and spreading across the United States of America faster. So, anything is possible.

Let’s discuss cities in the United States where pickleball is most popular at the time of writing.

If you’re familiar with pickleball’s colorful history, then you won’t argue over Seattle’s place on this list. Bainbridge Island, a city in Washington, had the honor of being where pickleball originated.

Research has shown that Seattle boasts the highest number of pickleball courts in the entire country. A 2020 statistical report indicates that there are 3 courts per 20,000 residents in Seattle, WA.

Iowa’s love for pickleball is boldly written all over the state. And excitingly, they have recorded steady in the number of courts available, thanks to investments from pickleball enthusiasts in the city.

So, pickleball is a popular sport in Des Moines, IA. It has been witnessing a massive increase in the number of indoor and outdoor courts over the years. Most big churches and local fitness centers here have world-class pickleball courts.

A recent survey shows that there are 2.9 courts per 20,000 residents in Des Moines, Iowa. But expect this figure to increase in no time, given the city’s passion for the sport over the years.

Columbus isn’t only the capital and most populous city in Ohio. You can call it home to pickleball lovers.

In 2019, Columbus Recreation and Parks surprisingly added 23 more pickleball courts to the ones available. And they increased instructional and court times, giving residents more opportunities to enjoy the game.

Additionally, there have also been promises to increase the number of pickleball courts in the future, increasing the chance of pickleball growth in the city.

Online, you would find a dedicated PDF pickleball resource guide from the government. It contains information about pickleball in the area, such as court locations, court opening times, and instructions.

A 2020 report shows that Columbus has 2.7 pickleball courts per 20,000 residents. However, it’s only a matter of time before that figure quadruples. You can even see how the number of indoor and outdoor pickleball courts is increasing daily.

Minnesota’s snowy winter would make anyone believe indoor pickleball courts would be the best option. But that’s not the case. If you can create time to visit St. Paul, called the “Twin Cities,” then that mindset would change completely.

The Allianz Field, St. Paul, MN’s new stadium isn’t the only structure that will captivate you. Parks, high-end pickleball courts, and the passion residents are showing towards the sport will leave you speechless.

At St. Paul, it seems as if pickleball is becoming the sport of choice for many residents. Why? Many of the empty tennis courts are being transformed into pickleball courts.

Honolulu, Hawaii’s thriving pickleball sport, is a poorly kept secret. The city has experienced a colossal increase in the number of pickleball courts it has over the years.

So, if you’re a pickleball fan, player, or analyst, Honolulu is one of the ideal places to consider spending your next vacation. Enjoy your favorite sport while the cool ocean breeze refreshes your tender skin.

The Honolulu Department of Parks and Recreation is also doing a great job of helping the sport become popular. You’ll find a dedicated website to the Honolulu Pickleball Association. And what’s more, they have repurposed many tennis and volleyball courts for pickleball sport.

So, pickleball is flourishing in Chesapeake, just like tennis. But the latter is still very much ahead.

However, a 2020 report indicates that Chesapeake, Virginia, has 2.2 pickleball courts per 20,000 persons.

Note: Besides Chesapeake, pickleball in Arlington County is also thriving.

In 2016, some pickleball enthusiasts assisted Madison’s Parks and Recreation Department to transform two tennis courts in the famous Garner Park into the city’s first-ever pickleball courts. Since then, the game has grown massively.

You’ll find over a hundred outdoor and indoor pickleball courts within a distance of 20 miles of Madison.

So, now, there are over a hundred courts from the initial two. A 2020 report indicates that Madison, Wisconsin, boasts 2.2 courts per 20,000 persons, the same as Chesapeake, Virginia.

On a general note, the weather in Florida lends itself to outdoor sports. So there’s nothing stopping pickleball from thriving here. The Sunshine State remains one of the perfect destinations to vacation if you’re looking to play outdoor pickleball to satisfaction.

Pickleball has grown in popularity across Florida over the years. It has become a favorite sport for many active adults, 55+, and retirement communities across the state.

And thanks to the US Open Pickleball Championship, Naples, Florida, is now regarded as the world’s pickleball capital.

Boise, Idaho, is another city that’s doing something great to develop pickleball. The Boise Parks and Recreational Department has even given the green light for the ongoing construction of Idaho’s largest dedicated pickle court.

So, it’s a matter of time before Idaho becomes a top destination for pickleball sport.

American Football is Ohio’s most famous sport. But pickleball’s growth over the years indicates that it could become the most popular in no distant time.

Join the annual Cincinnati pickleball tournament, win games, and become a legend in the sport.

The government of Arizona is doing a great job in making pickleball an enjoyable and must-play sport.

They have managed to provide tons of competition-ready pickleball courts, which are open day and night. Tons of private pickleball courts are also springing up in almost every corner of the city.

Senior citizens in Henderson, Nevada, are embracing pickleball sport. And the city has been doing all it can to provide the enabling environment for the sport.

Henderson’s pickleball courts have increased in numbers over the years. The city’s first pickleball tournament is also on the way.

So, where is pickleball most popular? Pickleball is spreading to all corners of the United States of America. Tournaments are also being organized across the country, while pickleball clubs are sprouting here and there.

This sport is a combination of ping pong and tennis. But what makes it unique is the shallow learning curve and affordability of the equipment needed to play the game.

However, Seattle, Washington, still has the highest number of pickleball courts as of writing. Nonetheless, Naples is called the world’s pickleball capital.