How To Play Pickleball Well: From Novice To Master 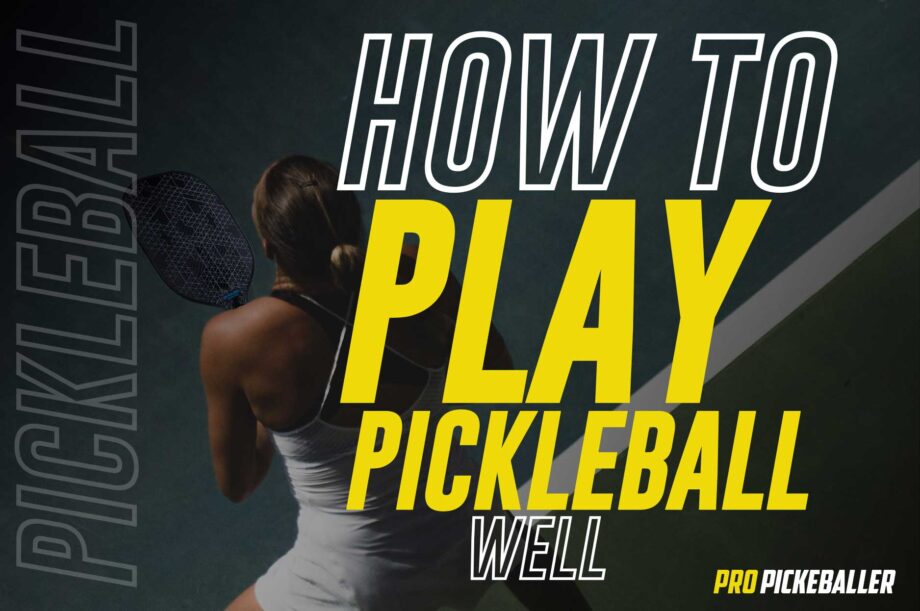 Pickleball is getting more and more popular around the globe as more countries embrace it. It means that the competition in this game is growing, and you need to sharpen your skill to stand out.

Whether you play for fun or professionally, it’s natural to aspire to be a good player. Pickleball is a soft game, requiring more finesse and hand speed rather than physical strength. Let us get into the details and see how you can get better at Pickleball.

How To Play Pickleball Well

Pickleball does not take too much time to master, but it is always a good idea to play it safe. Let your opponent make the mistakes and focus on consistently getting the ball over the net. If you get a winning shot along the way, take it if you are confident you can get it in.

Try to enjoy the game and get as many strokes in between as you can. Eventually, the opponent is bound to make a mistake and give you an opening to score. Consistency is more important than aggressive offense, especially for beginners.

You can also get better by trying to get as close to the kitchen as you can. In high-level Pickleball games, you will notice that it always ends with the players at the kitchen line. As soon as you make an effective dink shot, move forward towards the kitchen.

As the opponent is about to hit the ball, stop and return the shot, and once you are clear, you can advance and move to the line. It’s tempting for most players to wait for the ball in the backcourt and hit it on the bounce, but it is safer to volley it at the front line.

Always watch the ball when playing. The court is busy, and two players squeeze in the court, making it is easy to get distracted. One of the hardest things to do in Pickleball is seeing the ball, how it spins, bounces, and lands on your paddle.

You will notice how easy the game becomes when you are no longer distracted by your opponents or activities around the court. Try to keep your eyes on the ball and keep your head down, and you will be in the zone when it is just you and the Pickleball.

Try to get in a fluid and smooth stroke. There are many ways to stroke or grab the paddle, but a good stroke will go a long way in helping you win games. A good stroke begins with the legs and goes with the entire body, not just the wrist.

Strokes like these allow players to develop consistency in their hits. Moreover, it also increases the control you have over the ball. Try to be as mobile as you can and enjoy the game, emphasize your technique and the ball, and you should be fine.

Like any other sport, you need to practice as much as possible to improve your hits. You can practice with a friend or use a wall, whichever is available to you, and you should see a difference in your court management and general game performance.

You could have already built up some skill, and you can play a decent Pickleball game, but you don’t perform as well as you want to. Here are some mistakes you could be making that cost you the games:

Having the ball bounce too high

When the ball comes over, make sure you hit it as flat as possible to ensure it goes over the net, but it does not bounce high after crossing to keep the opponent at a disadvantage throughout the game.

If you give the opponent high bouncing balls, they will take advantage and hurt you on offense. A high and slow ball is easy to work with, and it gives an avenue for tricky shots that are hard to defend.

You are giving the opponent long or high balls

When playing Pickleball, you need to make the opponent as comfortable as possible while respecting the rules. It means you need to stretch their motion and make it hard for them to get the ball.

Long balls and high balls make it easy for the opponent to return them. High balls are especially problematic for you since the opponent can target them at your feet with ease, making it impossible for you to get to them.

As a beginner, you must have been told to avoid spinning, and this is to simplify the learning process. However, as you get more advanced, you will need the spin since it is an excellent way to prevent the ball from bouncing too high.

The lack of pattern recognition is a significant issue, and it is a strategic flaw that costs many people games or makes it unnecessarily difficult for them to win. It would help if you watched for your opponent’s patterns to know their strengths and weaknesses.

Once you see what someone is good at, feed them the ball in a way they are uncomfortable with to reduce their attack efficiency. If there is a change in pattern, you need to respond accordingly, so your opponent never has an advantage.

You are not changing up the serve

The issue with using the same serve repeatedly is that you are training your opponent to hit your serve. As the match goes on, they will make better returns and make the game harder for you.

Try to change up your serves and be unpredictable about it, and it will mess them up since they will not be ready for any of your serves. Also, change your positioning on the court to alter the angle at which they receive the ball.

How To Dominate The Net

The net and kitchen are the two most critical controlling elements in a Pickleball game. Knowing how to use the net and space appropriately will help you get better and increase your win rate as you learn.

The core positioning at the non-volley zone is vital in playing Pickleball since most of the action happens here.

If you look at professional games, you’ll notice that most players try to get as close to the non-volley line as possible.

After your third shot, when you have successfully advanced to the NVZ line, try to get yourself in a comfortable position that allows you free range of motion. The most important thing to consider is holding your ground while you are at the line.

You need to stay close to the NVZ line but be keen not to step inside the NVZ. Being at the line gives you easier access to the bouncing ball and better shots for volleys.

Maintain your body position and move accordingly, sideways, without going back or taking a foot back.

Many intermediate players allow themselves to get pushed back from the line, which is a significant disadvantage.

You might go back, and your opponent traps you, thereby sending the ball wide, and the further back you go, the more court you leave the opponent. It means that they could volley the ball at your feet, close to the NVZ, and you would be too far off to raise it; thus, they will gain points on you.

If the opponent shoots short dinks, you have to move further to get the ball, reducing the chances of getting the ball.

When you are close to the NVZ, you’ll have more chances to attack. The reason behind this is dinks come in high enough for volleying.

If you are away from the line, you will have to let the ball bounce which is not suitable for your offense.

Being at the NVZ is advantageous both on attack and defense. When you are close to the line, you have more opportunities to attack and reduce the chances of making a mistake.

The less you run around the court, the more concentration you have on the ball. Consequently, your performance is better.

Hence, this is why you see most professionals try to get as close to the NVZ as they can since it allows them to put pressure on the opponent.

Once you are good at using the space around the net, you will notice a difference in your skill level. You will put more balls away and speed up the shots, making it easier to win the game.

Pickleball is a fantastic game, and it is an excellent way to pass the time. You can also play Pickleball professionally or participate in international competitions to make some money out of it. To do this, you need to train and refine your skills to get better.

Avoid making mistakes that give your opponent an advantage in the gameplay since most people capitalize on these to win.

For example, a vital part of Pickleball is trying to have complete control of the area around the net to increase the attacking advantage and reduce defending disadvantage.