Is Pickleball A Olympic Sport: What Players Should Know 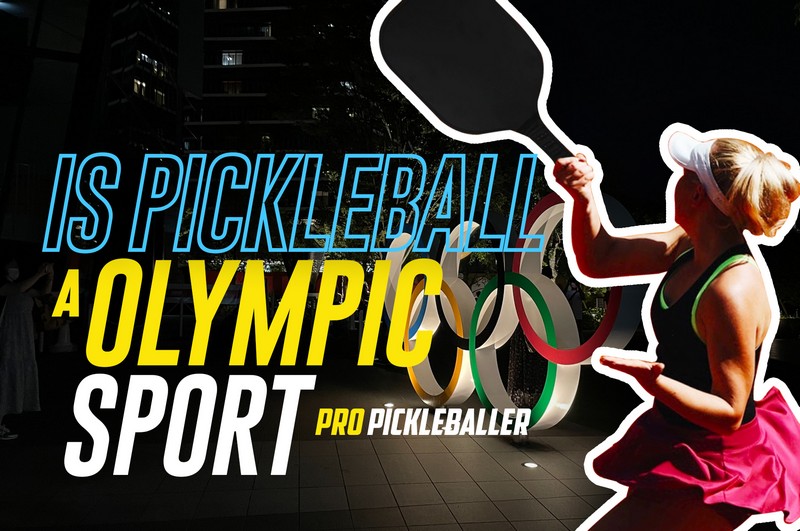 Have you ever wondered why pickleball isn’t in the Olympics? It is strange for many fans and players not watching their favorite sport on the big screen.

Badminton and tennis are Olympic sports. So, why is pickleball not yet on the list of racquet sports on one of the world’s biggest sporting events? Pickleball started many years ago and has spread to over 48 countries.

However, bear in mind that the IOC (International Olympics Committee) is in charge of admitting new and existing sports into the Olympics. And they have specific criteria for any sport to join the Olympics, clearly spelled out.

Becoming an Olympic sport is never the easiest of journeys for any sport, whether new or existing. It takes time and commitment from fans, enthusiasts, and the body overseeing the sport at the national and international level.

So, let’s dive back into the question this article is focusing on.

Is pickleball An Olympic sport?

Pickleball isn’t an Olympic sport just yet. Perhaps, it might become one in the future. It has recorded massive progress, popularity-wise. And there have been considerable efforts to make it a popular sport in top world events.

Currently, badminton, tennis, including table tennis, appear to be the only racquet Olympic sports. But we expect pickleball to join the world event soon.

So, that’s the answer to the question, but there’s more you need to know. We urge you to keep reading!

Why Is Making Pickleball An Olympic Sport Crucial?

There are a plethora of reasons making pickleball an Olympic sport is a big step forward. Let’s try to explain them.

Yes, pickleball is growing in popularity. But has its growth surpassed that of tennis? No, it hasn’t. Don’t forget, tennis is an Olympic sport and look how popular it is.

The thing is, any sport can become famous without the Olympics. By this, we mean spread across the globe and gain a huge following. But joining the Olympics can speed up a sport’s growth.

So, if pickleball becomes an Olympic sport, expect it to spread across the world much quicker. Fans and players would be happy by such development.

#2: Better recognition and reward for players:

The reward fans get from watching pickleball in the Olympics is entertainment. But the players would have a better opportunity to win gold medals, attract bumper contracts, enter the history books and lead better lives.

There’s no better feeling than knowing you’re training not only to play pickleball at local competitions but internationally. Such a feeling will give players the push to put in more effort during training and deliver stellar performances when called into action.

So, making pickleball an Olympic sport would have a positive impact on players. It will encourage them to start taking the sport seriously. Of course, fans can expect games to be more competitive when such happens.

Firstly, let’s begin by saying any sport can join the Olympics. But it’s not for fans and players, or even the local association, to decide. The International Olympic Committee (IOC) is responsible for including sports in the Olympics.

It would be a great thing for fans and players to respectively watch and play pickleball in the Olympics. Is there a chance it can happen? Yes, there is. It is only a matter of time before it does happen.

Seeing people of different age groups battling it out on the court would bring colossal entertainment. Pickleball can offer such, given the age group that can play the sport.

Why Pickleball Is Yet To Become An Olympic Sport

Well, the reasons are numerous. Firstly, pickleball isn’t that popular yet, though it’s spreading fast throughout the globe. But you can’t compare its popularity with that of tennis, or badminton. These racquet sports are well-known and popular around the world.

How does popularity impact a sport’s chance of joining the Olympics? There is a chance that when a sport is popular, it might be well-developed in countries of various athletes that would be competing.

What this means is, athletes from various countries would have the same advantages. No one would have a better chance of winning the competition because most players competing aren’t well-prepared.

Pickleball emerged from the United States of America, and it’s widespread across North America, as things stand. So, you can expect people from this part of the world to be vast in the game. If pickleball became an Olympic sport, you could put your money on players from these countries to perform better.

The International Olympic Committee considers various criteria before including sports in the Olympics. Pickleball hasn’t met those criteria yet, though work is ongoing to achieve that.

Has Pickleball Met The IOC Requirements To Become An Olympic Sport?

Well, at the time of writing, pickleball hasn’t met the requirements to join the Olympics. The only positive thing is that the sport is spreading fast across the globe. The age group of players, affordability of equipment, and simplicity of the sport are contributing factors to its speedy growth.

Currently, the International Federation of Pickleball’s member countries is 48 in number. And they include continents such as Europe, North America, South America, Oceania, Africa, and Asia.

When Is Pickleball Likely To Become An Olympic Sport?

One of the requirements to join the Olympics is to have an international body, just like tennis and other sports. Pickleball has an international federation and well-defined rules on how to play the sport.

The only stumbling block is that pickleball’s international body hasn’t been recognized or approved by the IOC. Approval takes over 3 years, which is a long time, given how close the 2024 Paris Olympic is now.

So, what time would be more likely for pickleball to join the Olympics? The best and most visible time would be 2028. Before then, pickleball might have met all the requirements set by the IOC.

How Pickleball Can Became An Olympic Sport

The International Olympic Committee (IOC) decides the number of sports athletes can participate in. In 2019, we all witnessed that despite the myriads of sports out there, athletes only participated in 65 sports.

So, not every sport makes it to the Olympics. And no one fully understands the IOC’s criteria for deciding which sport spectators would see in the Olympics. However, the committee has divided sports featured in the Olympics into eight categories.

Now, the big question is, how can pickleball get into the Olympics? It is simply by meeting the IOC’s requirements. And here are the various criteria.

So, all these are the requirements for pickleball to become an Olympic sport. You can see here that popularity is a huge factor.

Is pickleball an Olympic sport? Currently, it’s not. But the progress the IFP has made thus far indicates that it’s only a matter of time.

The requirements for any sport to join the Olympics are straightforward. Pickleball is already on its way to meeting those requirements and giving the IOC a reason to consider it an Olympic sport.

Pickleball already has an international body, well-defined rules, and it’s spreading to various parts of the globe.