Is Pickleball Easier Than Tennis: What You Need To Know 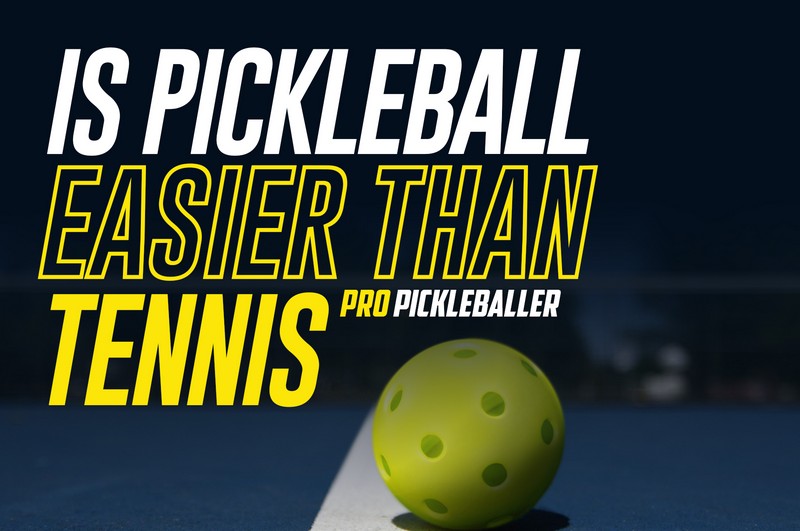 Though pickleball emerged from tennis and ping pong, many believe it’s easier than tennis. Any age group can play the game. But then, does that justify claims that pickleball is much simpler than tennis?

Well, if you ask tennis players if tennis is more complicated than pickleball, you’ll get a yes. Most pickleball players might say otherwise.

The bottom line is both games have their challenges. And they’re exciting and engaging to play. However, tennis happens to be more popular than pickleball. But the question many want to know is this.

Is pickleball easier than tennis?

If by easy you mean learning curve, then yes, pickleball is more straightforward than tennis. You can start playing well after one or more games. But tennis isn’t that easy. It has various rules and many other things you may have to learn. It takes time to learn tennis.

Bending to fire shots, and making saves, has its strain on the lower back, though the possibility of this happening in tennis is high.

Again, if by easy you’re referring to movement, then pickleball is more straightforward than tennis, as players tend to make lesser movements during games.

The age group that plays pickleball is a clear indication of how easy the game is. People of all age groups play the sport. These include children and even senior citizens. People in this category will find playing tennis more challenging.

Keep reading as we unravel various reasons that we believe pickleball is much easier than tennis.

5 Ways Pickleball And Tennis Are Different

Pickleball and tennis are both played on a court, but there are huge differences between both sports. Let’s discuss those differences.

The concrete or asphalt surface of tennis and pickleball courts will make you think they’re both the same. But in reality, you’ll discover that both are not the same.

Pickleball courts are much smaller than tennis courts. They measure 44 feet long and 20 feet wide.

The net is another thing that shows the noticeable difference between both sports. Anyway, pickleball courts are smaller, so we don’t expect the net to be any different.

So, pickleball nets are much smaller than tennis nets. Their net is 21 feet and 9 inches wide, while the tennis net is 42 feet wide. The tennis net’s supporting poles are also larger.

Is it possible to use a tennis net to play pickleball? Yes, you can. But please only consider such in an informal setting. Nonetheless, getting a portable pickleball net is still the best option. If you’re a professional player, you need to consider training under the right conditions.

However, most people would like the idea of using one net for pickleball and tennis, which isn’t a bad idea. Just know that the tennis net is wider, so to use for pickleball, getting a net converter should be on your mind.

The net converter will help divide the net on each side, which is a great idea.

A Handy Tip: You may be thinking that the pickleball net is smaller, and as such, getting the ball over the net would be a walk in the park. Unfortunately, that’s not the case. It’s a bit difficult, but that’s what makes the game interesting, anyway.

If you don’t know much about pickleball, it won’t be a surprise thinking that “the kitchen” on the court is where cooking takes place. Most people won’t blame you for thinking that way because everyone recognizes the kitchen for two things – cooking and food.

But the kitchen on the pickleball court means something different. Another name for it is the “non-volley area.” It is 7-feet deep, and you have to abide by several rules once you’re in this zone.

One of such rules is that you can’t play a volley here. You have to let the ball bounce before hitting it.

Volley is a powerful shot that is sure to earn points. So, imagine what could happen if there were no kitchen. Anyone with height advantage could easily stand at the net and volley every ball that comes their way.

This was one of the major issues, which pickleball originators encountered during the early stages of the sport. They had to solve the problem by creating the non-volley area, known as “The kitchen.”

The pickleball court is too small to let players stand by the net (kitchen area) and play volleys. It won’t even make the game enjoyable.

So, is there a kitchen on the tennis court? No, there isn’t. Pickleball is the only racquet sport that has one.

In pickleball, players use paddles, while players use racquets in tennis. And there’s a vast difference between both.

Firstly, the racquet is longer than the paddle. The latter also has a shorter handle. And they’re more like stone walls. So, when a ball hits the paddle, it doesn’t compress. But strings on tennis racquets do.

Can there be holes in the pickleball paddle? The International Federation of Pickleball has already set the specification for paddles. It states that paddles shall not have holes, indention, tape, rough texture, or any feature that can give an extra spin to the ball.

So, this means pickleball can’t have holes like a tennis racquet, which is one of the significant differences between both.

Another thing to note is that there’s no restriction on how much paddles can weigh.

There are huge differences between pickleball and tennis’ balls. While one bounces higher, the other doesn’t.

Now, what’s the difference between both balls? Tennis balls tend to bounce higher. They come designed with a hollow rubber core, which compresses whenever a player strikes the ball or lands on the ground.

So, the rubber core is what causes tennis balls to bounce so high. The reverse is the case for balls used in pickleball.

The balls used in pickleball are nothing but shells. They don’t have a core, neither do they compress. Therefore, they don’t bounce high. These balls are made of a somewhat hard plastic material.

A Handy Tip: Pickle suffers wear and cracks easily, especially during the cold winter period. So carry enough balls whenever you’re heading to the court to play.

Pickleball also boasts two different ball types. That is, balls used indoors aren’t the same as the ones used outdoors. Outdoor balls have smaller holes and are much heavier and harder.

Indoor balls are the direct opposite. They have larger holes, are lightweight and softer.

The Intensity Of Pickle Vs. Tennis

Have you ever had the privilege to watch a tennis game? You’ll be hooked all through the game. But this doesn’t make pickleball any less engaging. The thing is, tennis boasts more intensity than pickleball.

Tennis does require from players, a great deal of conditioning. So, if you’re looking for a racquet game with more intensity, tennis is a wise choice.

Is tennis ideal for individuals with aging joints? The simple answer is no; older adults cannot play tennis because of the game’s intensity and movements. It would be too much for their body and joints to handle.

But pickleball is the preferred option for senior citizens. Even children play and enjoy pickleball a lot.

Pickleball’s movements are fewer than tennis. And balls used don’t bounce as high as tennis balls on the court. Pickleball balls are utterly different from tennis balls.