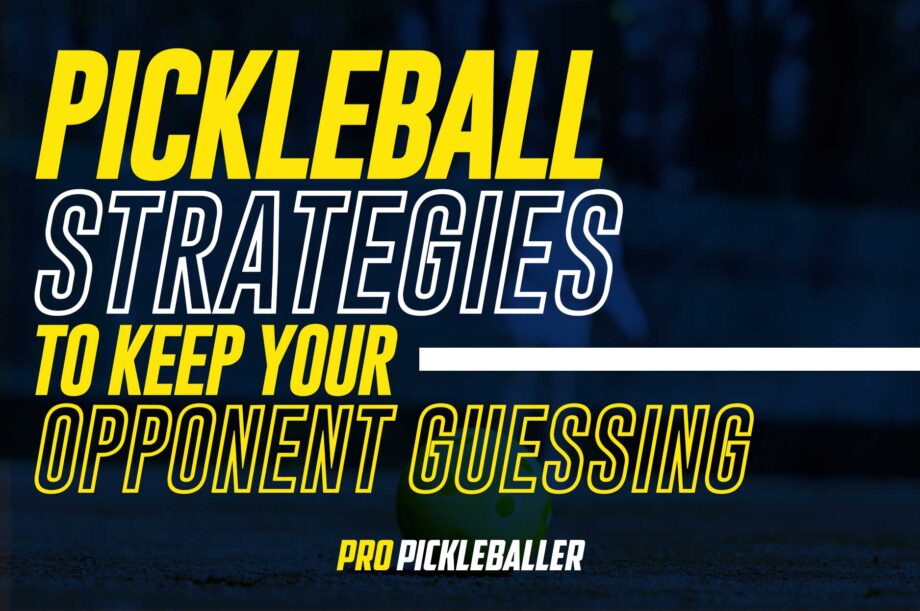 Most of the time, your opponent will be expecting a drop shot on the third shot following the serve: this is pickleball 101. From this point onward, players can return the shot with a volley stroke rather than a groundstroke. It is the first point after a service where your opponent will likely charge the kitchen line, and a perfectly placed drop shot takes away your opponent’s advantage.

However, sometimes you should “zig” when the opposition thinks you’re going to “zag”.

That means doing the unexpected. Here are a few strategies for keeping your opponents on their toes while playing pickleball, ensuring that you dictate the gameplay rather than the opposition.

It is usually a good idea to return any serve as deep as you can. At any point during the game of Pickleball, if you can relegate your opposition to the end line or baseline, you limit your opponent’s options. It is challenging to hit an overhead smash or a dink shot from the back of the court. Because of this, just about every time your opponent serves, he’ll be expecting a deep shot in return. Try a well-placed, cross-court short shot or drop shot instead.

Set Up before They Hit Their Shot

The second time it takes you to return the ball, your opponent is watching you. They are watching the flight of the ball. They are trying to decide if you are giving off any tells or clues as to what you may be attempting next. While your return is still traveling over the net, set up for a backhand, forehand, or overhand posture for just a split second. Right before your opponent hits the ball, return to the ready position. It can get your opponent to anticipate your next move wrongly.

Arc Your Drop Shots High on Your Side of the Net

It is very tough, even for a veteran, to perform a drop shot, one that seemingly drops like a dead duck after crossing the net. That means your most successful drop shots and dinks will have to have some loft to them. To make sure they plummet as vertically as possible after crossing the net, hit them, so their maximum height is on your side of the net, in your kitchen.

Use Lob Shots Rarely … if Ever

Beginners love trying lob shots and smash. There are several instances where your opponent will expect a lob shot. If they have charged the kitchen line and hit a low trajectory shot, usually, this is when you should employ a lob or deep, arcing shot to move your opponent to the back of the court. A cross-court drop or low trajectory side-arm smash is not expected in this situation.

Hit to Your Opponent’s “Weak” Hand

Hitting the hand of your opponent that is not holding the paddle is a good thing. Doing so forces a body realignment and a backhand stroke, making it harder to hit than a forehand.

When you have driven your opponent to the back of the court, they will be expecting a drop shot or dink much of the time. By faking an underhand or chest-level motion that looks like a dead giveaway of these shots and then hitting deep instead, you can catch your opponent rushing the kitchen.