How to Play the No-Volley Line to Win 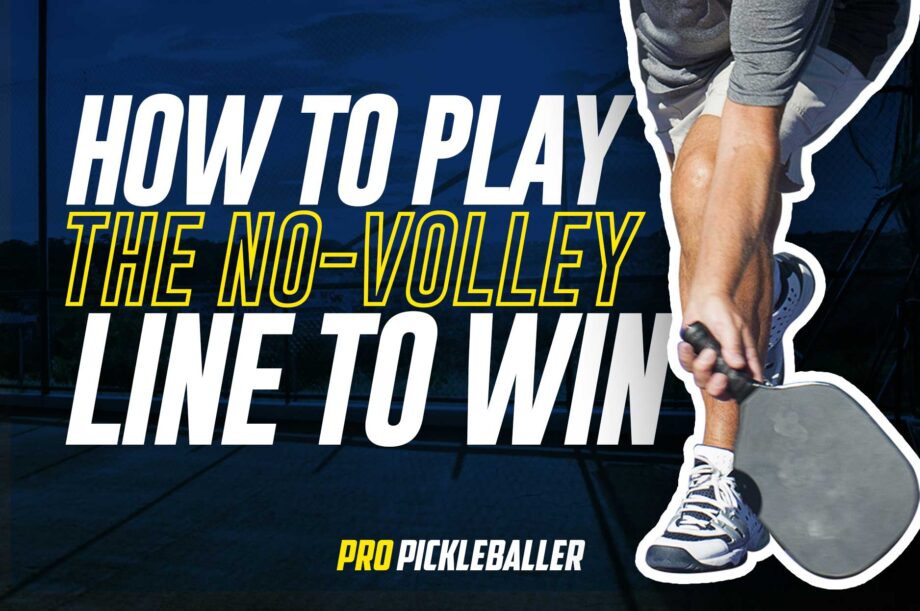 If you like pickling vegetables at home, you probably spend a lot of time in the kitchen. Accordingly, successful Pickleball means understanding the rules of the sport’s kitchen and how to use this no-volley zone to your advantage. The most important part of the no-volley zone is the line separating the kitchen from the dual service courts, also called the no-volley line.

When you learn how to use the kitchen and the no-volley line as the third player, you benefit from the following two hard and fast Pickleball rules taken directly from the official United States of America Pickleball Association (USAPA) rulebook.

“Volleying is prohibited within the non-volley zone. This rule prevents players from executing smashes from a position within the zone.”

It is also a foul if your momentum carries you into the no-volley zone after hitting a legal volley. Other than that, you may stand in the kitchen to your heart’s content and do whatever you like. However, the best Pickleball players don’t spend much time in this no-volley zone.

The Step and Retreat Move

Most of the time, you should have your body positioned parallel to the net, a couple of inches behind the no-volley line. If your opponent successfully hits a drop or dink shot into the kitchen, remember that once the ball bounces in this no-volley zone, you can enter this dead man’s territory and make a return shot. If you have to enter this area to take a ball on the bounce, step one foot into the kitchen, then immediately retreat.

When you play most of your Pickleball matches at/or near the no-volley line, you can hit more shots downward. Anytime you hit the ball in an upward motion in pickleball, you run the risk of tossing up an easy lollipop for your opponent to smash. A simple rule to remember for pickleball success is that the more times you hit the ball downward than upward, the more successful you will be. Staying near the no-volley line allows you to do this more often than not.

Get to the Kitchen Line as Soon as You Can

Any time spent further back in the court increases the options available to your opponent. You reduce your opponent’s choices by 30 to 50 percent simply by moving towards the kitchen line. Since drops and dinks are the hardest shots to return, getting to the no-volley line as quickly as possible is crucial because this dramatically limits seeing those shots from your opponent.

Bounce on Your Toes

You don’t actually want to noticeably jump up and down, but you want to be uncommitted to a move to the left or the right. With this, you keep your body centered over your feet, which should be spread slightly wider than your shoulders. This position at the kitchen line allows you to move quickly left or right or even to take a step or two backward. Assuming this position in the center of the court at the kitchen line gives your opponent no preferred court position to hit the ball.

If your opponent moves you to the left or right side of your court and you’re near the kitchen line, this is the perfect opportunity for a powerful shot. Fire a cross-court dink, using the middle of the net as your aiming point. Doing so limits the distance the ball travels away from the net. It means that even if your opponent returns this shot, it’ll most likely have a lot of lofts, making your return shot easier.