The Best Pickleball Player In The World: Knowing The Game 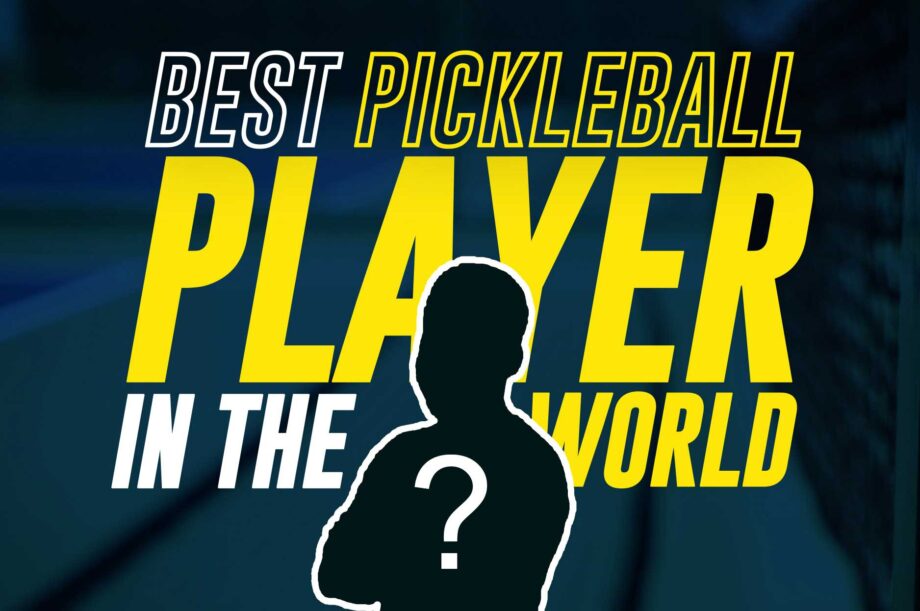 Pickleball is a great sport that is quickly gaining popularity in the United States of America. Today in America, it’s common to see people play the mentioned sport as you may have also played it yourself.

The popularity and widespread of pickleball has led to the creation of phenomenal players.

Talking about exceptional players, these players display expert sportsmanship and skills to win in major tournaments. You cannot become a pro in the sport if you only win a couple of games. You need to be so consistent and set a historic winning streak.

Several pickleball players have done extra work to perfect their skills, putting them in the rank of the pros.

Typically, the players get consistently ranked according to their categories, like men’s doubles and women’s singles.

However, in this article, we will talk about the overall best pickleball players in the world. Read on to find out.

The Best Pickleball Player In The World

He achieved 18,000 total ranking points and has participated in twelve major Pickleball events. Since 2019, Benjamin Johns has had a commendable record of wins.

He is a professional Pickleball player from the United States of America. His full name is Benjamin Ellingham Johns. He was born on the 18th day of March 1999.

He was brought up in Laytonville, Maryland. As a child, he did not attend any actual school since he went through homeschooling. Johns was born in a big family, being the middle child out of seven.

His big brother, known as Collin Johns, is also a professional high-ranking Pickleball player. Currently, Benjamin Johns studies at the University of Maryland. He is doing material science.

Benjamin Johns started playing table tennis and tennis at a young age. During this time, he did show his prowess in the two sports.

He did help his brother Collin Johns prepare for the professional tennis circuit, which added a lot to his skills.

Today, Benjamin Johns is undoubtedly one of the bright young stars on the professional Pickleball circuit. The funny thing is that he has been in this sport for a brief period.

Within three years, he has won several gold medals in Men’s Single Pro. In the same tournament, he did also bag the silver medal in the famous Mixed Doubles Pro.

Johns then earned a gold medal for the singles and Double Pro in the popular open tournament known as Beer City. In the same competition, he went ahead to win the gold medals in two categories.

In 2017, at the USAPA National Championship, he did win gold, bronze, and silver medals, all in three different categories. What an achievement at such a young age!

This 2017 was one of the best years for this young Pickleball talent. He won gold medals at the Canada Nationals across all the Men’s Pro categories, and in the US Open, he obtained the gold medal in Men’s Single Pro.

In 2018, he continued with this fine form. He and his best-ever Pickleball partner known as Kyle Yates were the winners of a famous tournament held in Margarita Ville.

Together with his partner Yate, they won another gold medal in Men’s Doubles Open at the US Open. He also earned a silver medal in the singles category.

He won a Triple Crown in 2019 at the Tournament of Champions. Since then, he has always been the Men’s Single Champion in the event for the past three straight years.

At a young age, he has already written outstanding records. He is the first-ever male Pickleball player to continuously bag the three “Triple Crown” titles at the significant event.

No doubt, his experience from playing table tennis and tennis have made Benjamin Johns this lethal. Today, several high-level tennis players are joining the Pickleball sport.

They find it to be as enjoyable as tennis, plus the small court makes it easy. Before, you could not find any tennis player in this sport, but now almost all top Pickleball players have a tennis background.

Benjamin Johns is the first Pickleball player to sign an endorsement deal. However, this was no surprise considering his outstanding records at the pro level of Pickleball sport.

His endorsement deal was with the famous Franklin brand. Franklin is a well-known sports goods manufacturer and has been in business since 1946.

Before it had signed up, Joe Namath and the entire line of products was around him. Franklin has signed other players are Barry Bonds, Dan Marino, David Robinson, and many more.

In collaboration with Franklin, Benjamin Johns has a signature Pickleball paddle made available in 2019. The paddle was for intermediate and beginner players, and it sells very well.

The Pickleball paddle weighs eight oz., and its length is 16 ½ inches. You can get this product from Amazon or Franklin Stores.

Other than Pickleball, the player has other businesses built around his fame. His business journey started in 2019. He partnered with another professional Pickleball player known as Dekel Bar.

With him, they launched the Pickleball Getaways. This company combines all-inclusive vacations, and it’s specifically to exotic destinations.

The instructions on the site are Pickleball-oriented. There are several destinations that Johns and Bar have led trips. These places are Richmond, BC, Ecuador, Mayan Riviera, and many more.

In 2019, he decided to diversify. He and his brother Collin Johns released the Pickleball 360, an instructional video subscription service.

Benjamin Johns is all business. He knows that he can build something significant with his fame and get customers because of his big following.

It’s good to capitalize on fame. In 2021, Johns launched a new business known as elog.com. Through the website, people can invest in the dynamic cryptocurrency index fund.

Again in 2021, Ben Johns and his friend Rob Nunnery, a professional Pickleball player, started a podcast, known as the Freestyle Boys Podcast. On the show, the two discuss the latest Pickleball happenings and news. It includes the tournament fixtures, travel, food, and many more.

Benjamin Johns decided to join the Pickleball sport in 2016 while at the University of Maryland. By 2017, he had already set several records in the sport.

He has continued to dominate the sport since then. His deal with the Franklin brand means that they make his gear. He has a paddle known as “the Ben Johns’ Signature Paddle.”

Jenifer Dawson is a popular name in both Pickleball and tennis. Today, she is a professional Pickleball player with outstanding records.

She did start her career in tennis, where she has set some exceptional records too. Jenifer has tremendous power, and this is something that has made her immensely successful in both sports.

In 2017 at Minto US Open, she won a Triple Crown, becoming the first to win this incredible medal. She was able to win it after topping the Mixed Doubles and Senior Pro Singles.

Like other Pickleball players, Jenifer did start from tennis which built a good base for her. However, you do not have to be a tennis player to be able to play tennis. All you need is passion and a proper understanding of the rules.

Jenifer also insists that all you need is passion or love for the sport. You should also have the determination and drive, and it will be so important when it comes to training.

It seems like all the Pickle ballplayers have a keen eye for business. For example, she is the owner of the Paddle Centre in California and Bobby Riggs Racket.

However, the businesses are a partnership between her and his husband. Another great thing is that their son is also Pro player.

As previously mentioned, Pickleball is among the popular sports in the United States. Because of its popularity, many have decided to play the game up to professional levels.

Today, some tennis players are also joining this exciting sport. It’s because it has some similarities with tennis. Like tennis, it’s played on a court which is smaller than a tennis court. This makes the game very interactive since the opponents can easily converse while playing.

Today, the best Pickleball player is known as Benjamin Johns. He began his professional Pickleball career in 2017 and has managed to beat the records in the sport.