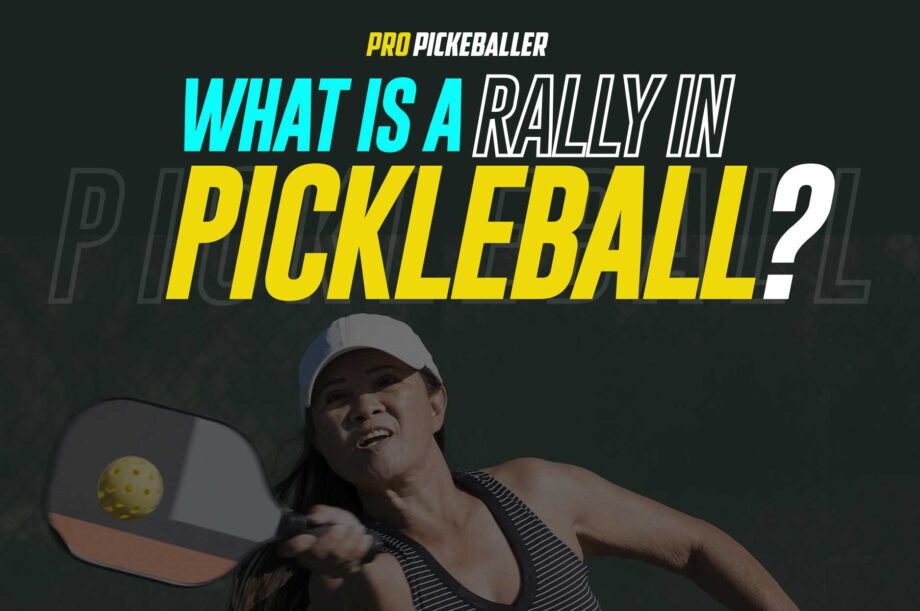 Pickleball is a competitive game that provides room for people to socialize. Besides, players get an excellent fun workout playing this game.

This sport combines aspects of badminton and tennis. Players strike a perforated polymer ball with solid paddles. Like the previously mentioned sports, Pickleball also has Singles or Doubles games.

Like other games, Pickleball has its own rules on how to score. I bet anyone in a competitive game would be interested in scoring. Read on to discover the rules and facts about Pickleball.

What is a rally in Pickleball?

A rally is a continuous game that begins as soon as the ball gets served. It remains active until the game terminates with a fault.

The pickleball game features singles and doubles modes. Pickleball, like most bat games, has rally scoring. A point is rewarded after every rally regardless of the side that serves.

The traditional scoring system’s side out results in only the serving player(s) receiving the point. The game ends at 11 with a 2-point margin consideration.

Essentially, 11-10 is not considered a win in Pickleball. The winning team would have to score an extra point to win the match.

Players exchange their positions with every serve that earned them a point. This alternating structure goes on until a team commits a fault during the game.

The rules for traditional pickleball scoring and the badminton scoring rules are akin. Most racket games have switched to rally scoring, and Pickleball is the only game left behind.

Doubles is a pickleball game with two players on each side. The player on the even side of the court starts the game. Each point earned requires the serving team players to swap positions for the next serve.

If the first server loses a rally, the serve is lost, and the second server has the chance to serve the team.

A side out occurs when both servers have faulted. The receiving team then gets an opportunity to serve the ball too.

The key takeaway here is that there is no point earned during the rally in the standard doubles rule. Talks about the possibilities of including rally scoring in contemporary Pickleball are still ongoing.

Singles scoring is less intricate as only one player is serving the ball. With every point won, the player switches their side on the court and continues serving.

There are no rallies in the singles match. Each party loses a serve with every fault, hence flipping the serving turns.

Like in doubles, traditional scoring doesn’t award points to the opposing team with each fault.

The explosion in the growth of Pickleball has resulted in discussions about how players should implement scoring in Pickleball. Proponents of these discussions want a shift from traditional scoring to rally scoring.

Rally scoring will cut the learning curve for beginners. Moreover, the games would be faster, hence making the courts less crowded. All these grounds would suffice the television attractiveness of the game.

Scores in rallies are unlike standard traditional scoring. Points are earned in every rally regardless of the side that serves the ball.

Basics of Rally Scoring in Pickleball

The basics of rally scoring are a no-brainer. Firstly, each rally is worth a point, and each player only gets to serve once.

Serve one and two are, therefore, not included. Each team member gets a chance to serve throughout the game.

The right side of the Pickleball court is always the even side, while the odd side is on the left. The serving team’s score will determine the side of the court from which a player will play the service.

A game commences with a nil-nil score, with one team serving from the even side. The serving team wins a point when the opposing team fails to get the ball past the net.

Players do not alternate sides unless they are the serving team and have won a point. The game is usually played to eleven points with a win by two points. Players can extend the gameplay to 15 or 21 if the gameplay is happening quickly.

Before a serve, the serving team must state its points and the opposing team’s points. Furthermore, it is a requirement for the serving player to declare their serving number.

When the serving team loses a rally, the second server will serve from their current position (odd or even side).

Once the serving team loses a rally, the opposing team has two chances to serve. This rule is famously known as a side out.

It is, therefore, normal to find players positioned in a stacking formation. This formation provides the receiving team’s players an advantageous position for their team.

The traditional stacking formation allows for one player to stand outside the court. Again, the rules do not specify which position the players should stand. It is up to a team to decide.

The only exception to positioning applies to the serving player. At least one of the serving layer’s feet should be on the playing surface behind the baseline.

However, the rally-scoring faces adversities in its implementation. The critics have raised harsh premises concerning the learning curve of rally scoring to newbies.

Even though their grounds have some weight, rally scoring makes the game more attractive and helps clear the courts faster.

Rally scoring in Pickleball appears sustainable; Aside from the naysayers’ narrative, players should embrace the rule when enacted.