What Is Pickleball A Combination Of? The Answer Will Surprise You! 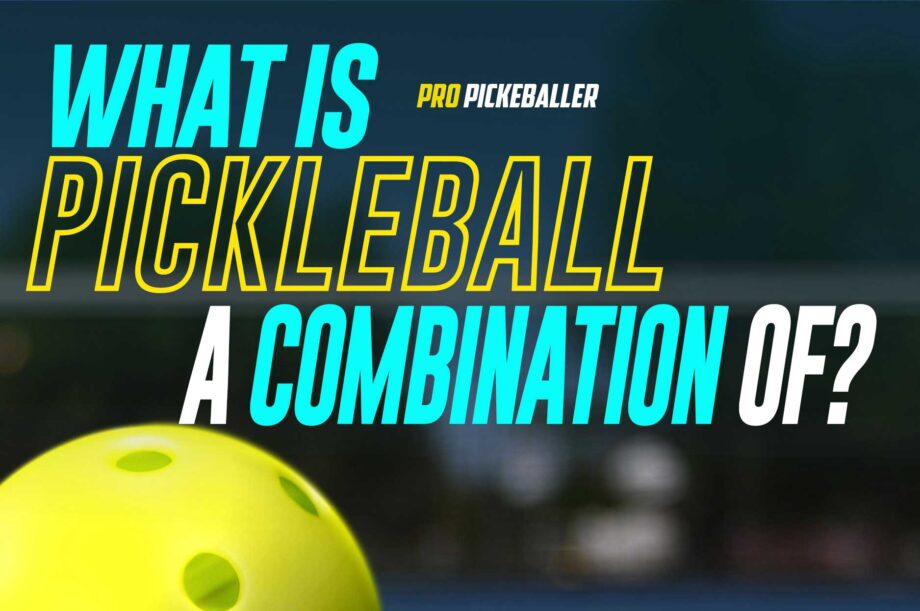 Pickleball is a sport that has steadily gained popularity over the past decade, and it’s easy to see why: Pickleball is fun, engaging, and very social.

The game uses a paddle and a perforated plastic ball on an indoor or outdoor court.

If you’re an active retiree or just someone who enjoys playing sports, Pickleball could be the perfect activity for you.

The game’s main objective is to hit the ball with your paddle for it to land in your opponent’s court or on the ground. If you hit the ball before it touches anything else, you earn a point.

What is Pickleball a Combination of?

Pickleball is a combination of Ping-pong, Tennis, and Badminton. It involves using a perforated plastic ball to hit or slice across court boundaries through wooden paddles that are slightly larger than those used for ping pong.

Pickleball is faster and more competitive than tennis, yet easier to learn and play than other racquet sports such as ping-pong or badminton.

With its field of play, rules, and equipment, the game is easy enough for beginners to learn in an afternoon but challenging enough for experienced players to stay engaged.

How Is Pickleball A Combination Of Other Games?

Pickleball and ping-pong are both ball games that two or four players can play. Both games have the same goal of getting the ball over the net to score points.

Pickleball is more fun than ping-pong. It’s faster-paced and more exciting for spectators, and it’s easier to play for lifelong athletes and beginners alike.

While some may argue that ping-pong has a strategic advantage since you can execute spin on the ball, this is not necessarily true in Pickleball.

Both games take place on a rectangular area with paddles and rackets. Both use an overhand stroke to hit a small ball back and forth across the net toward a score area without hitting the net or letting your opponent hit it out of bounds.

Finally, people can incorporate both sports into group activities.

The most significant difference is how the balls get hit, as well as their size. Ping-pong balls are much smaller than Pickleball, so the paddles used for this sport must be smaller.

In ping-pong, you have a table with a net on each end. In Pickleball, you only have one placed in the middle of the court, so players always stay on one side or another.

Badminton and Pickleball are both racquet sports played by two or four players on a rectangular court.

In badminton, the goal is to hit the shuttlecock over the net so that it lands in your opponent’s half of the court.

The same applies to Pickleball, except you use plastic paddles rather than racquets and a Wiffle ball instead of a shuttlecock.

They are both racquet sports played in singles or doubles. They are both easier to play than tennis but are faster-paced and more challenging. Both courts measure the same size, with pickleball courts measuring 20’x40′.

The ball is also smaller than a tennis ball but more prominent than a badminton shuttlecock.

Tennis and Pickleball both use racquets and balls on a court.

There are many similarities between the two sports, and understanding these similarities can help with your game.

The paddle is arguably the most evident distinction between the two sports. According to the USAPA Rule Book, Pickleball paddles must not have any holes, indentations, or rough texturing that might allow a player to provide more spin to the ball.

Tennis racquets use fiberglass and graphite, making them lighter while maintaining the same strength and power for effective strokes.

Tennis and pickleball balls are also not the same. For Pickleball, the balls use plastic which makes it way lighter than a tennis ball. On the other hand, Tennis balls use rubber.

Tennis balls are brilliant yellow at significant athletic events but can be almost any hue in leisure play. Pickleball balls are perforated and come in yellow, orange, white, and neon.

It’s very typical in tennis to strike balls on the side of your body. Turning your body sideways and hitting the ball that way is an ordinary move.

In Pickleball, though, you never want the ball to get near to you. The reason behind this is because, unlike in tennis, it is exceedingly difficult to produce speed on the ball when swinging forward in Pickleball.

It works well in tennis because the ball dips into the racquet and becomes bouncier. However, as previously stated, this is not the case in Pickleball.

The closer the Pickleball gets to you, the more difficult it is to keep pace with the ball. Because we’re using what’s effectively a Wiffle ball, you have to be careful.

Pickleball is a smaller version of tennis. Pickleball courts measure 20′ x 44′, which is smaller than the size of a tennis court.

A serve in Pickleball is very similar to the serve in tennis. The difference between them lies in how high you toss the ball before the service shot.

The higher you toss, the more powerful your shot will be, but if you under-toss, then your opponent will have more time for preparation.

The service isn’t taken seriously. At the very least, it’s not that serious. You can genuinely win points in tennis by serving.

However, this is exceptionally unusual in Pickleball and nearly never occurs at the professional level.

Pickleball players are not permitted to serve the ball overhanded. Instead, it would be best if you struck it underhandedly.

Given this and the fact that the ball is light and perforated, the serve in Pickleball isn’t forceful enough to result in aces. Instead, players prefer to prioritize ball placement above power.

The Kitchen rule is dominant in Pickleball. On the other hand, there are no limitations on the player’s position on their side of the court in tennis.

The net in Pickleball is somewhat lower than in tennis and badminton.

The pickleball scoring is different from other racquet games because the point of the game is not to get points.

The most significant thing in Pickleball is how many times you serve the ball over the net, and this is when you receive your reward.

You will also notice that minimal points are scored when playing against someone who knows what they are doing.

In most games, the first person to reach 21 points wins the set. In Pickleball, this timeframe is extended by one point for every two games played.

Pickleball is a social activity, frequently accompanied by music, in-game banter, and even a drink or two. The other racquet games are competitive.

If you’re a tennis player, you’re undoubtedly used to playing singles all of the time. Pickleball singles is an entirely other experience.

The reason for this is that, as previously said, the court is significantly smaller, and the ball does not bounce as high.

Given this, the angles you can accomplish are significantly more extensive, and the low bounce of the ball doesn’t allow you to get there quickly enough. As a result, singles are a punishing test of speed, strength, and stamina.

Pickleball, as a result, is primarily a doubles sport.

In conclusion, Pickleball is a combination of tennis, ping-pong, and badminton with some variations.

The game takes place on a court similar to tennis but smaller than badminton courts, with the added benefit for players to choose between indoors or outdoors.

It’s no wonder people of all ages are flocking to this unique sport. If you want to learn more or try out Pickleball for yourself, check out the local court near you!