What Is Stacking In Pickleball: A Complete Guide To Stacking 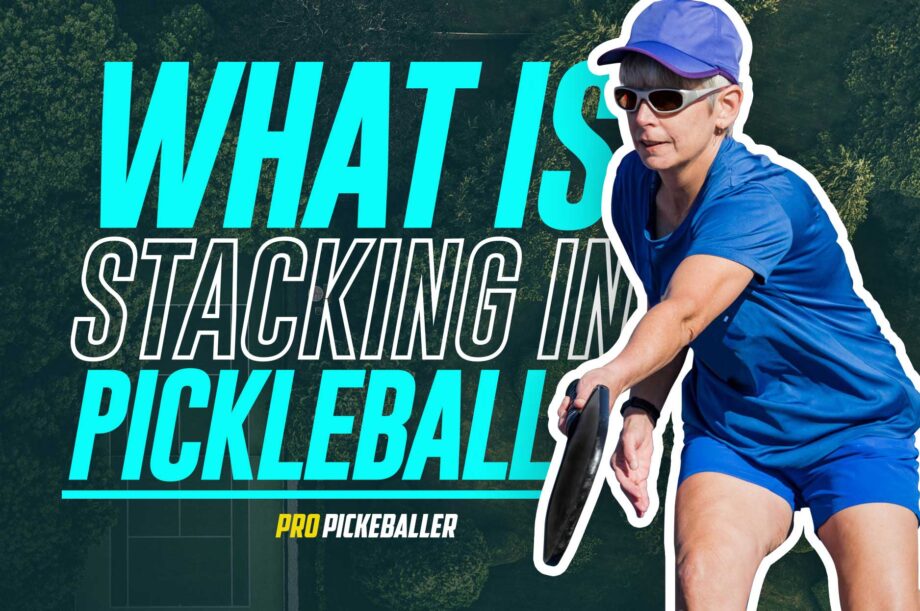 The game of Pickleball, once a tiny niche sport, has exploded in popularity in recent years. Now, you can find pickleball courts popping up in cities and towns across the US.

Pickleball is a sport that is easy to learn, and people of all ages and fitness levels can play.

To be good at this sport, you have to know how to do a proper Pickleball stack. Here’s a guide on how to become a pro player when it comes to stacking in Pickleball.

What Is Stacking In Pickleball?

Stacking in Pickleball involves forming a wall of defense by having the two players on the same team positioned one after another. Unlike traditional positioning, players are rearranged to keep one player on a particular side of the court.

This technique has become more popular with advancing technology, making it easier for professional teams to study their opponents and find the best ways to break down defenses.

Benefits Of Stacking In Pickleball

The stacking strategy is primarily depicted in double teams with a right-handed player and a left-handed player, allowing players to hide the center of the court with their forehead swing.

When established well, the opponents hit two players in the forehead-ready position. This technique increases the amount of time a player is playing on one side of the court.

Benefits of Stacking include;

Then each player plays according to their strengths inside of occupying one side of the court. The stability of the players will most likely keep the match going and promote team building.

When Is Stacking Used As A Strategy In Pickleball?

Stacking is when two players on one team stand directly behind each other. The court lines make up the back wall of their triangle.

This way, they can pass the ball around and hit winners while playing defense against their opponents.

Stacking can either be full or partial. Most of the time, stacking in Pickleball only occurs under specific instances. However, some teams practice this at every point.

In a typical situation, double teams that contain a right-handed player and a left-handed one, and the serving team most likely use stacking.

Scenarios Where The Stacking Strategy Can Be Used

Things to Consider Before Using Stacking In Pickleball

When the less energetic player is returning, you will stay in the convectional positioning so that he will not have to run across the court.

Firstly, no rules govern which side one may stand or hit the ball on unless serving or hitting a return of serve. Therefore, this makes stacking possible to use.

However, regarding the other rules of stacking in Pickleball, they specifically address these issues;

When the stacking team is serving, the left-handed player starts the game. If they earned a point, the start server must move to the court’s left and serve at this point.

Then, their partner would stand outside the court to the left as their other partner serves. Both players will then move to their initial sides to the right after hitting the serve.

Again, the rules only dictate from which side a player should serve or return serve. The positions for each player in the stacking team are known.

If a player is unsure or wishes to confirm where they should position themselves, they must inquire with the referee to know their specific positions in the court.

A fault may occur if they serve or return a serve from the wrong position, resulting in a point or serve loss.

When the stacking team is receiving, the most progressive groups tend to position the non-receiving player outside the court on the side but near the non-volley zone to hide.

The players may then choose to stand in a more conventional point and cross to their preferred courtside.

A player on the non-valley zone line puts their hand behind their back, either exposing their palm or clenching their fists. These moves hint their partner at the baseline on what they plan on doing after their partner hits a return serve.

The Legality Of Stacking In Pickleball.

There is no doubt that stacking in Pickleball is a legal activity since there is absolutely no rule that dictates where a player can stand in a doubles match unless the player is serving the ball and receiving a serve.

Nothing prevents the players from standing where they want unless they finish their serve or the returning player completes their return of serve.

The rule does not explain where the other players should stand and who will play next after the ball is returned, like in table tennis, where the order of shot-making is pre-defined.

Stacking is not allowed in many pickleball tournaments, but it’s perfectly legal during casual games or matches between friends and family members. That means it’s entirely up to you whether you want to use this tactic or not.

Stacking is an essential strategy in Pickleball, which helps make sure each player focuses more on their strengths than weaknesses and uses it more to promote team building and a diverse game.

Understanding and practicing this technique helps one to increase the number and ease with which you play with new partners during open or just for fun games.

In addition, one may choose whether to stack or not on every point, and it’s a choice you have. Hence, if stacking does not work for you, you may choose to switch it up.

Now that we’ve gone over how to stack in Pickleball, you can give it a try and see how it works for you!